Perhaps you saw the video that made its way around the internet before Christmas 2005. It showed a guy in Ohio that had all the lights on his house synchronized to music. Well when I saw it, two thoughts came to mind, “That is really cool” and “We can do that”. We were already using a computer to control a bunch of relays for our Halloween display and adapting the setup to Christmas lights--couldn’t be that hard! I sent an Email to my sons and a good friend of ours asking them what they thought and they all said “We can do that”. We played with it some that year and by New Years Eve we had lights dancing to music. The following year we had a full blown show up on the house! Most of the credit goes to my son Nathan and our family friend Steve. Nathan did most of the manual labor and Steve wrote the computer program that makes it all work.

After we saw how much people loved the lights and music we decided we have to keep doing this every year. We started by adding 2 new 20 amp circuits to the electrical panel and installing dedicated outlets just for the lights. The first years we used the 8 mechanical relays we had to run air canons in our Halloween display. The second year we just had to have more channels so we added 3 more sets of 8 relays and 3 more parallel ports to run them. We had 32 channels and 40 amps of power it would be years before we need more right!

By the end of the second year we realized that having only 32 channels was holding us back. The problem was each of our boards needed its own parallel port and it’s hard to get more than 4 ports from one computer. At the same time we started to have problems with the mechanical relays. The relays started sticking so we did some checking and found out that they were only rated for 100,000 operations. We checked the database for the program that runs the lights and found we had some songs that would do that in a week. It was time to find a new way to run things. The next step was clear: We need to move to solid state relays and a different controller.

The next controller ran off the serial port and had 64 channels. It also allowed us to run hundreds of feet on a low voltage wire and put a solid state relay closer to the lights. This meant we could use cat 5 cable instead of lamp cord and that brought the cost per new channel way down. We only made one 32 channel box of solid state relays that year. It went up under the eve to run everything on the roof. We still wanted more channels so we used 16 of the old mechanical relays to give us 48 channels.

The new controller and relays worked ok but we had some problems with them picking up noise. I don’t think anyone else saw it but we all know the lights were randomly coming on when they weren’t programmed to be on and that bugged the heck out of us. That year we spent a lot of time with an oscilloscope hooked up and never could get rid of that noise problem. We also added a lot more lights so it was time to upgrade one more time.

After months of research we settled on a new controller that would give us 128 channels from a single serial port and we would be able to use dimming. So we built the new controller and 4 new solid state relay boxes. Each of the relay boxes could hold 23 relays but we couldn’t afford all the relays so we settled for 40 of them. For that year we had 72 channels of dimmable lights.

The new controller works even better than we thought it would and we can daisy chain more of them together when we have enough money to add more lights. But for this year we just added more solid state relays so we would have some spares. It turns out that the solid state relays don’t do so well in the rain. Even though we have them fused we had several triacs burn out in the rain.

We're in the process of re-designing our web site to make it more mobile-friendly. If you use a mobile device and have any problems viewing our site, please let us know!

If you like ragtime music and the big-band sound, then you'll love the new song we added this year. It's called "Snowmiser and Heatmiser" as performed by the band Big Bad Voodoo Daddy. The song comes from an old children's holiday special, The Year Without A Santa Claus, that featured the Snowmiser and Heatmiser characters. 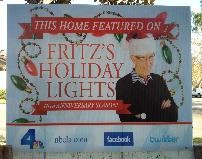 Our house was Featured on Fritz’s Holiday Lights tonight. Fritz is the local NBC weatherman and each night during the 11:00 news he shows footage of the best lights in the area.

We had so many requests we decided to add a second new song this year. The newest song is "Amazing Grace". This is not your standard version of Amazing Grace. This is the remixed "Techno" version of the song. It a little different than most of our songs so be sure to stop by and see it. Drop us an email and let us know what you think of the new song. [email protected].

This year’s new song is up and playing. The new song is "Nutrocker" by the Trans-Siberian Orchestra. The song "Nutrocker" was released on last year’s Night Castle album and like the other TSO songs we use it makes you want to dance with the lights.